The owner of the '67 Cougar dropped by with some sheet-metal parts yesterday so I can finally get started on the metal work. If there's one thing you learn quickly in this business is that you don't want to start cutting out metal before you have your replacement metal in hand!

The other thing you'll learn is that not all parts are created equal. There's way more crappy parts made in back-yard shops or overseas "craptories" and then passed off to unsuspecting restorers and repair shops than there is really good stuff. But because there's a market for replacement and patch parts, guys will try and make parts out of all sorts of homemade dies and jigs -  or even without - and sell them as re-pop (reproduction) parts. Over the years I've seen stuff that looks like it's been beat over a tree stump with an old boot passed off as "quality" repop parts.

Going over and evaluating re-pop parts can can take a bit of time. One needs to compare them against the original parts (which often times is no longer there), with each other and with the parts they mount to. Often they can be the wrong size, have the wrong cuts or worse, have the wrong contours - these parts had a bit of all three. 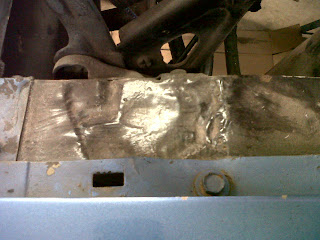 Here's one of the parts on the Cougar that needs replacing. It's part of the inner apron and is also the hood hinge plate. On top are two square holes for the insertion of captured nuts, to which the fender bolts to. 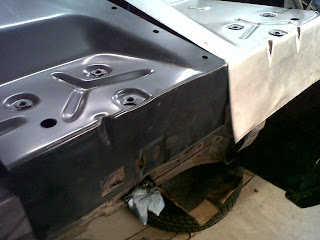 The people who sold Trent these parts said they where different because they source the best parts from various suppliers. Too bad the "best parts" are missing those square holes for the fender attachment bolts. The closer one, a very good reproduction part, has the square holes and also the three round holes where the shock tower cover attaches to - the one on the right is missing both. 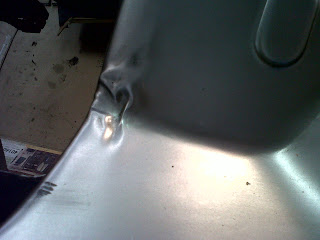 In addition to the missing holes, the quality of the pressing is poor, as shown by this wrinkle. Spots like these are clues that the part is likely off in other places and that contours will not match the original. You can see what I mean if you look at the photo above again - the poor repop on the right in  not bent at 90 degrees. 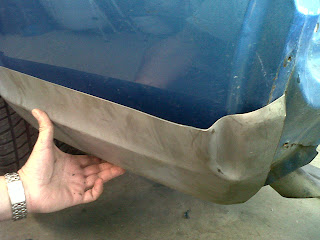 Looking at the rear lower quarter patch panel, one can see it's far from correct. I'm actually holding it tight to the body at the bottom. The piece hasn't been bent enough so the top will meet the quarter at the top. In addition, the contours at the rear, where the bumper fits, are not even close - and it will need to be trimmed and re-worked to fit. They company told Trent these where made on "original dies", which is a claim that now just raises red flags when I hear it! 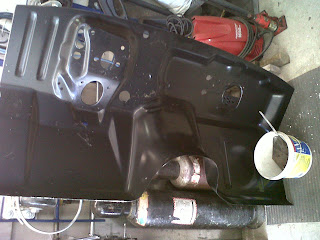 The large parts, including the toe/firewall panel and the left floor section, "look" much better - at  first glance....but I have yet to take real close look at them...which will happen tomorrow. 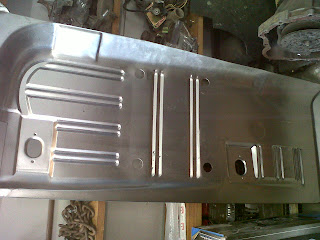 Don't forget to check out the website at www.E-tekRestorations.com !
Posted by E-tek at Sunday, April 22, 2012 Links to this post