After so much work went into paint, the owners decided that - while paint protection was paramount -
they didn't want to see undercoating covering so much of it. So, instead of attaching the rear fenders and coating the box sides with rubberized undercoating, I sourced clear rock guard film from a vinyl graphics and sign company (Trimline in Saskatoon) for the box sides under the fenders. Now when you  look from the side, you won't just see black undercoating. Expensive, but definitely worth it! 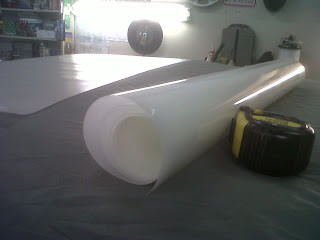 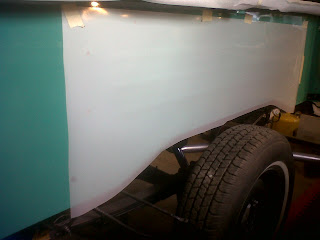 After it's cut to fit, a soapy water is sprayed to allow time to place the film and work out the air.
Once all the water is worked out the film is nearly invisible. 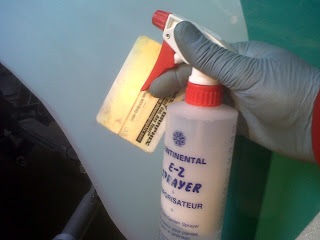 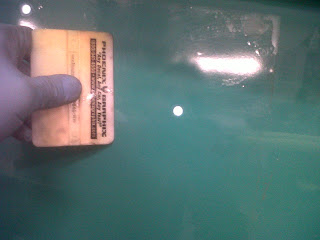 As I was applying the clear film, the front and rear glass where being installed. It was my first time using Showtime Glass and the owner, Chase really impressed me with his expertise, care and attention to detail. He'll definitely be our glass vendor of choice fro now on! 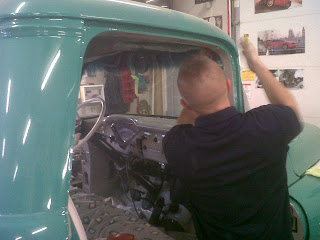 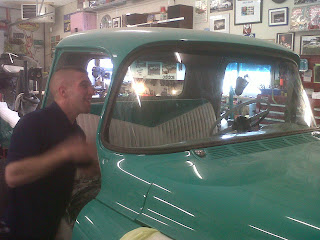 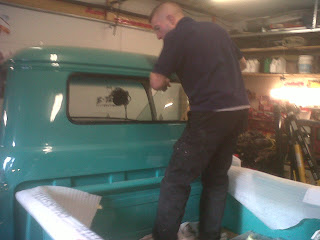 A suction cup is used to pull the glass into the truck so the rubber seal can be manipulated into place. It takes some wiggling and a little slapping, but he got it in and it really completes the "look". 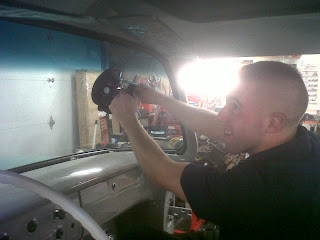 On a side note: one of the trucks' owners was over, helping me get the doors mounted and he took a couple photo's with his BB Phone - basically the same device I use to take all these blog photo's. One look at his photo's however told us there was something wrong with my device. His photo's where SO much more crisp, with WAY more depth, contrast and clarity! Was it maybe my lens? Could it just be dirty?

Sure enough, he cleans it out and the next photo's where like day and night. So, if you're using a digital device(especially a phone), remember to clean the lens regularly. It makes a HUGE difference: 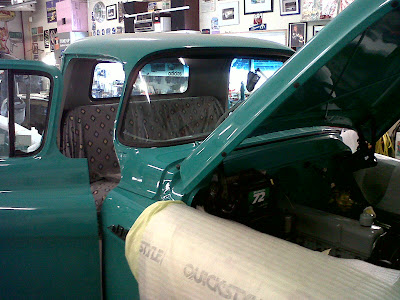 The doors also went on today. It's nice to have two guys for this job, even just to get them hung. Of course hanging them is barely one-tenth the job. If you've ever done this, you'll know how many times you have to loosen and tighten the hinge bolts while moving the door -  in, out, up and down -  to get it to fit right. A real time-saver is to drill a small (1/8") hole in the hinges - on both the body and door sides. This gives you a "close-enough" point when first bolting them up, then final adjustments can be done when the door seals are installed. 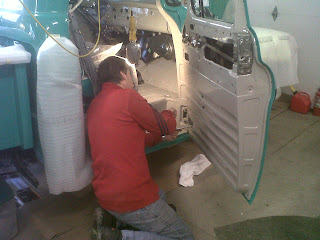 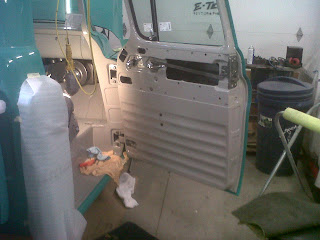 Next, we'll tackle the bed wood install, then the rear fenders and steps! 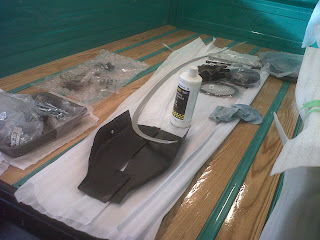