Before the Cougar comes in I'm trying to finish up my Galaxie. Every year it's the same - I want to go a bunch of stuff, but other projects get all my attention - and I want to drive the Gal!!

Today I removed the rear lower control arms - of course what should take an hour, took three! The bolts where seized through the bushings and had to be coerced out....

First up, getting the bolts apart. I used my half inch ratchet and a 3 foot extension tube and barely got the front ones out. On the rear ones, the nut came off, but not the bolt. 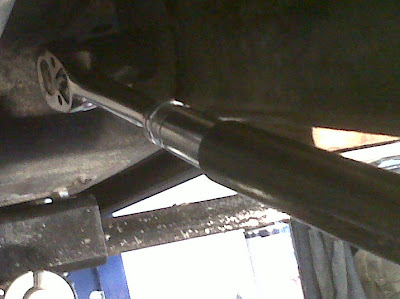 Screw it, lets cut 'em off! 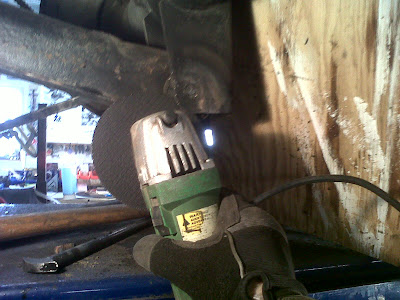 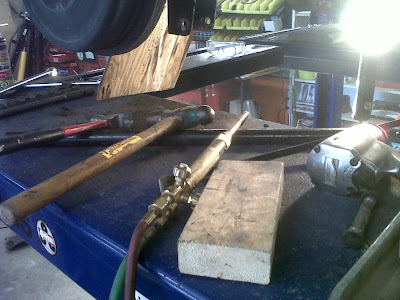 To get these gall-darned control arms out I had to use every high-persuasion tool I have! The bolts where seized, so I cut the ends off, but the brackets wouldn't spread enough to go over the stubs still left, so I had to cut inside the brackets (which you can see me doing above).
After that, they STILL wouldn't budge, so I heated up the brackets and tried to pry them apart and BEAT them out with the sledge! With all that beating and prying I had the lift wobbling pretty good a couple times - scary!
They finally came out, but not unscathed. I still need to get the seized bushings out too! Believe it or not, I've rarely ever needed a press, so here's a great excuse to build one - which I would love to do - if it weren't for the day it would take that I could be doing something "more productive". Of course I like fabricating stuff so much I'll likely buy the metal Monday and get 'er made one night next week! 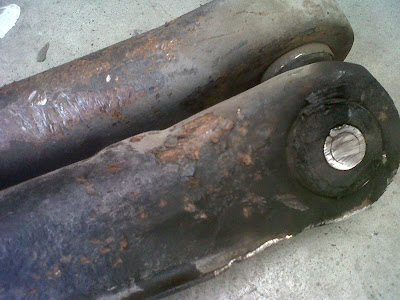 Now that they're out of the way, I can do the repairs to the frame rails. This is where the rails go up and over the rear end - so a very important junction, taking a lot of torque from holding up the entire rear end - it HAS to be strong. Likely, once I make the basic repair, I'll add plates to either side to add even more strength and rigidity to the entire rear section. 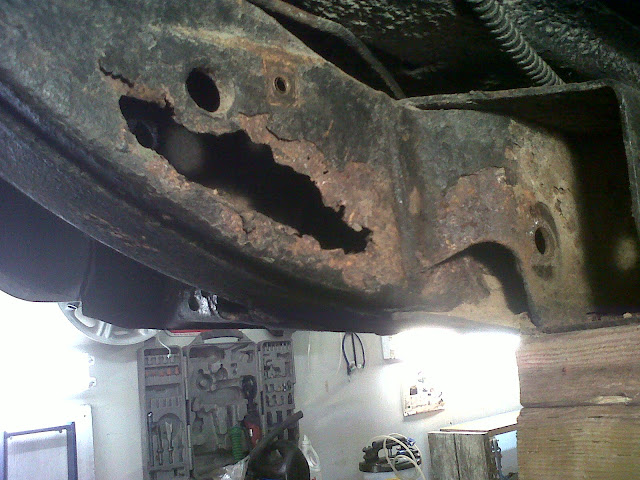 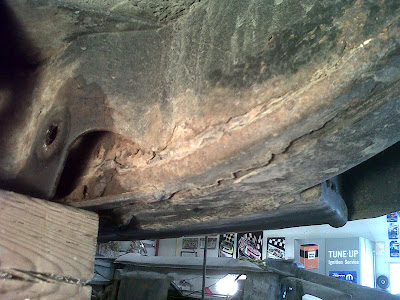 Here's just some of what was hiding inside. It's what causes all that rust! 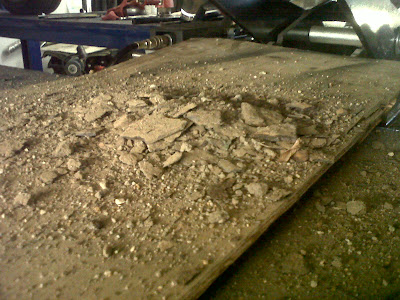 This baby is going to be a completely different animal after all this work: I've ordered new bushings from Rock Auto, Front and Rear Sway Bars with poly bushings from PST, shocks, brakes, strut rod bushings (as well as some seals and stuff for the top-side) from Dearborn, not to mention headers and dual 2 1/2" exhaust and full-flow mufflers from SUMMIT RACING (along with my flame-thrower idea!), so it's going to be an AWESOME summer for "OUR GAL"!!!!

Don't forget to check out the website at www.E-tekRestorations.com!

Special thanks to www.RUSTBULLET.com and www.CarCraft.com!
Posted by E-tek at Saturday, February 04, 2012 Links to this post

Email ThisBlogThis!Share to TwitterShare to FacebookShare to Pinterest
Here's a few more of the next E-tek Restoration project.
May be the "nicest" start to a job I've ever had!

Looks so good.....but here's some of the work required:

Can you spot the CRAPPY bodywork?

It's not that you wouldn't have a few little wrinkles on the back side of a repaired panel, but my standards are much higher than this! With much more hammer and dolly and much less filler, there would have been fewer wrinkles  - which I then would have finished on this side (the inside), so it would look like there was never a repair made.

In all it'll need front floors and quarter panels, plus whatever pops up once it's here and gone through. The owner is stripping it down and it'll be painted at BridgeCity Collision, owned by a very long-in-the-tooth restoration specialist named Corky. He has done - and owns - many wicked rides and is a perfectionist - which makes us the perfect team!

Don't forget to check out the website at www.E-tekRestorations.com.
Special thanks to www.RUSTBULLET.com and  www.CarCraft.com.
Posted by E-tek at Saturday, February 04, 2012 Links to this post