40 Ford - getting it ready for paint!

Just when you think you're close to done some stage, another issue comes up! Getting it ready for paint isn't just about the bodywork....there's many details to attend to, from gaps, fitting parts and panels, cleaning and detailing and re-arranging things so they look great after re-assembly. After paint is NOT the time to be making major changes or welding in new bolts!


I pulled the engine today, which will allow the firewall to be prepped and painted and the engine to be detailed. It's a lot tougher to make EFI engines "pretty" - due to all the wiring harnesses and funky intake plenums, but I'm sure it can be done - it'll just take some "thoughtful effort" - the rod-builders credo. 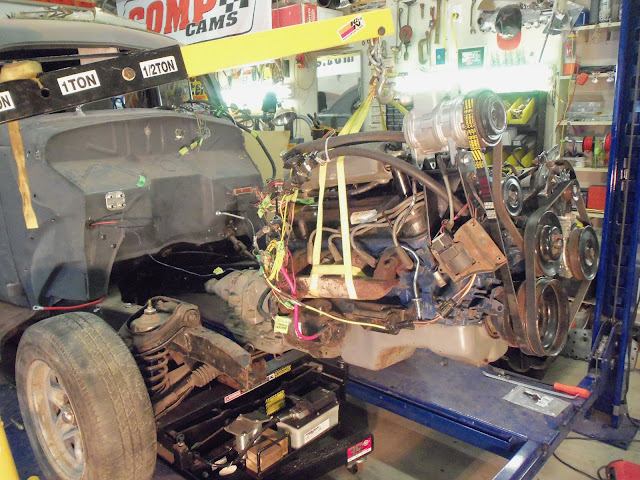 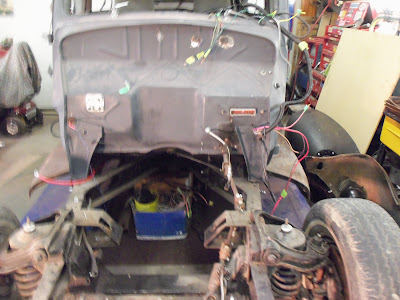 The rear bumper needed to be 'sucked in" a couple inches to make the entire project flow. That meant bending and shortening the bumper braces - which is WAY harder than one would think due to the braces and brackets being made of HARDENED, spring-steel. 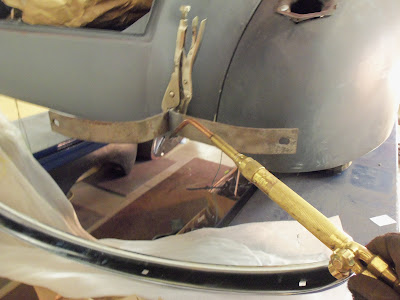 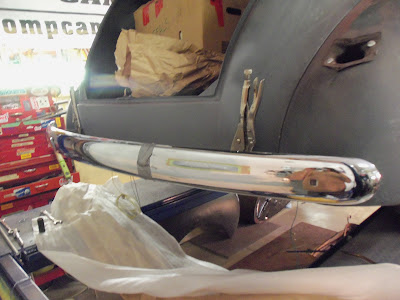 As the owner said, "just close enough to allow a polishing cloth to pass"! Looks way better for sure. 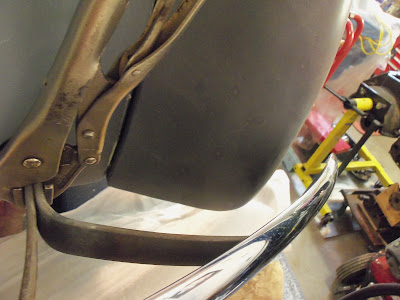 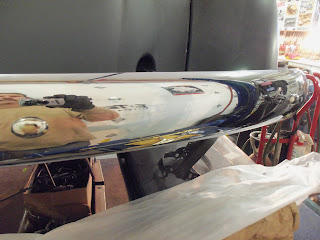 SIDE BAR - someone asked about  my body-tools. After 30 years doing this, professionally and as a hobby, I've gathered up a few tools....None of them as pretty as say, a shiny Snap-On set, or as interesting as an electricians set-up.....but the get a lot done! 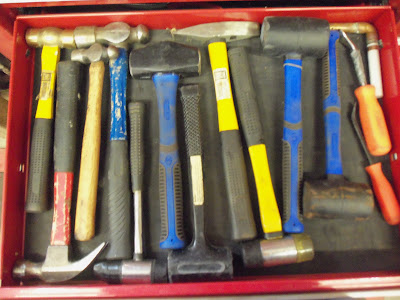 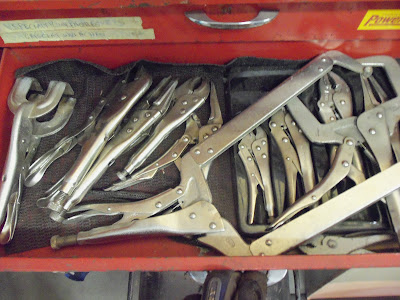 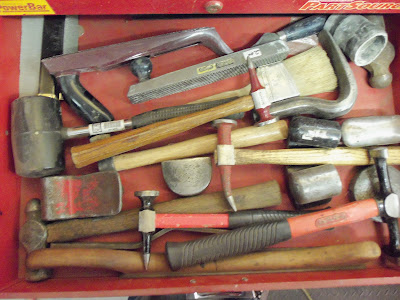 A lot of them are actually custom made or collected one-offs - things needed for a specific task, some made as I needed them. 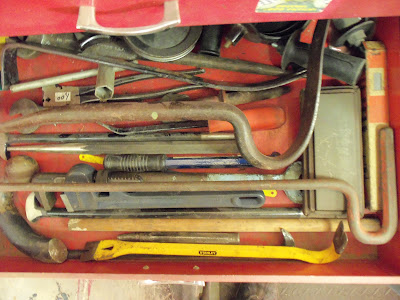 One example is my favorite bumping dolly. It's an OLD school trailer hitch ball - which has a lot of weight for bumping and a lot of contours for shaping. 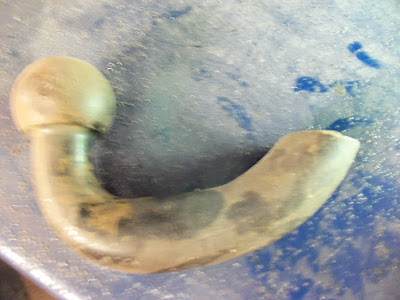 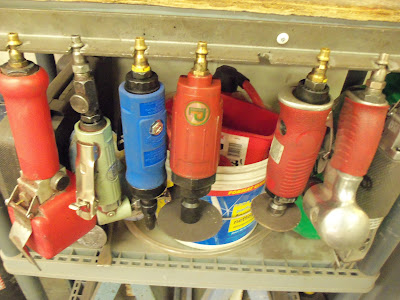 Next, I pulled off the running boards, which won't be painted, but covered in rubber matting. In order to preserve them though, I cleaned them up with a wax&grease remover (critical prior to painting anything), then applied POR15 to them. 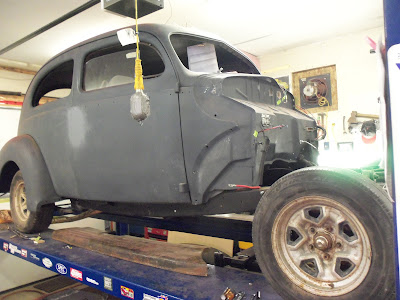 Sometimes people say POR15 (or whatever product) didn't stick to whatever they applied it to. This is almost ALWAYS due to improper prep of the substrate -  from it not being roughened enough (for mechanical adhesion), or not being clean enough (to remove oil, wax and dirt) - to allow for a proper bond to take place.

Just look how much dirt continues to be removed with each wipe of the cloth. You can see below that the dirt removed becomes less as you move left. I kept wiping until the blue Scott Towel cloth stayed blue - which was about 4 more 8-sides wipes!

This stuff is SO good, the only way to avoid the lid of a POR15 can from being permanently "welded" onto the can after use is to insert a sheet of thin plastic between them during storage. To keep POR15 for longer periods, I normally transfer the unused portion to a glass jar with a good lid (like a Mason jar), again with a piece of plastic wrap, then keep it somewhere COOL and DARK. If you're careful - and don't contaminate it - it'll stay useful for many months.

About this time, major glitch was uncovered Upon checking wheel-base measurements, the owner noted the rear end he installed 10 years ago may have been installed too far aft. He asked me to check the measurement and sure enough, it measured in at 114" - and it should be 112".

The answer of course was to move the rear end back - but how? We discussed moving the rear-end perches on the springs (but the springs have a locating bolt in their centers), purchasing new leafs ($200 each plus major re-assembly times), to cutting the top leaf and re-rolling the ends.

Inthe end, the easiest method was the right method - which was as 'simple' as removing and re-locating was moving the rear end perch forward on the frame rail  - 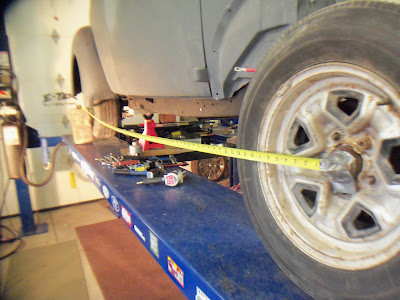 Meaning the rear end needed to be moved forward 2".... 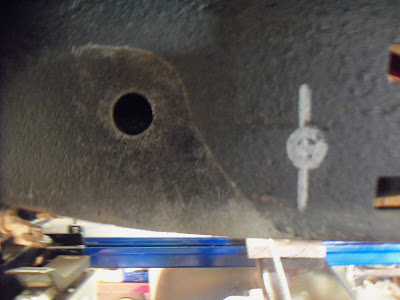 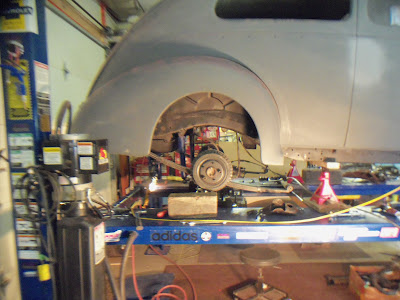 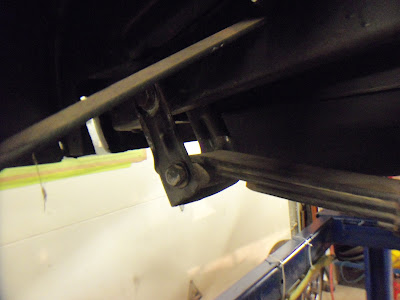 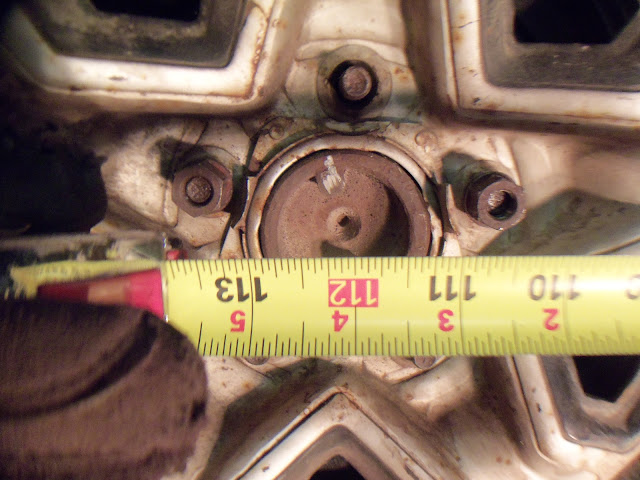 
The front end - and dash - still has some metal final work to be done before paint, so that's where I'll be spending the rest of my time before it goes to Graveyard Customs for paint in March. Looks like many years ago someone welded in some major patches - and repaired some major issues, but it was all just left at the weld stage - no further metalwork was done - which left a LOT to be finished. 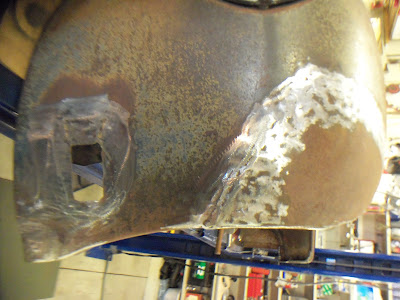 Some spots had been brazed (welded with a brass alloy) - which has to be removed before it can be mig-welded. 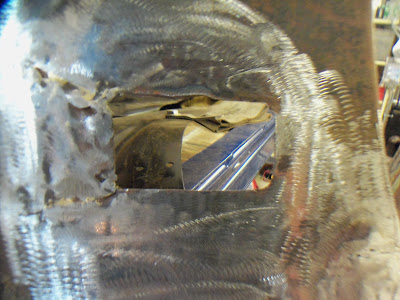 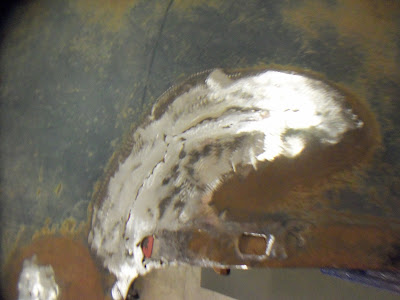 While I spend some alone time with the hammer and dolly, why not check out my website ;)

www.E-tekRestorations.com
Posted by E-tek at Saturday, January 26, 2013 Links to this post