Sometimes you have to go backwards to move forward.....

Today was spent going backwards on a few projects in order to get them to the point that we can move forward. First up was the cowl vent seal. 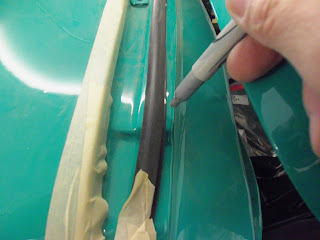 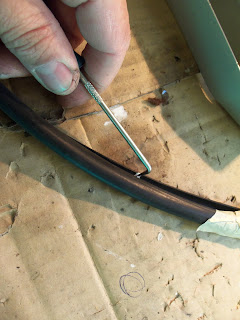 After aligning, measuring and inserting the metal push-in clips through the seal, I ended up breaking several of the clips upon insertion. 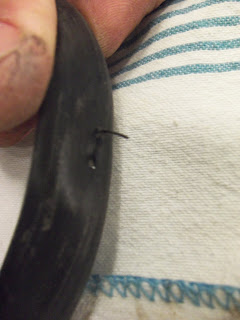 In the end, I decided to  purchase plastic push-in clips to replace these metal ones. Breakage, paint damage and rust are likely some of the reasons car makers went to plastic clips and here's a perfect use for them.You would think the replacement parts compnaies would know that too and I highly suggest you try to find a plastic replacement for any metal clips you come across in a restoration.


Below is the larger original clip and the new ones that came with the seal. Crappy! 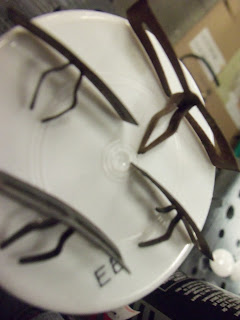 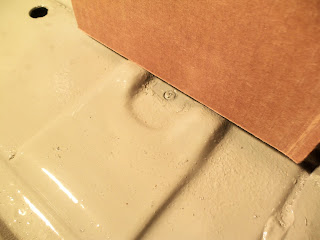 Next up was the gas tank and it's hold-downs. These are two of those things that should have been done prior to paint, but I missed the boat on the broken studs and the gas tank itself went direct to the painter without being cleaned and inspected.

Oh well - time to get 'er done so the project can move forward! 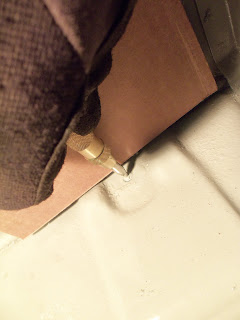 I've learned over time to use a scribe before drilling, especially in a spot like this! The last thing you need  - especially after paint - is a skating drill bit! 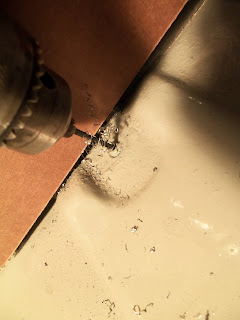 I broke 4 small bits, used a dremel at one point and also broke a large bit.....but I got it done. Sometimes I actually LOSE money at my shop rate!


Things are arely what they seem! The time lapse between the two drilling photo's was nearly 90 minutes! 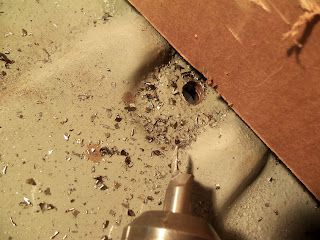 After the drilling was finally done, I painted the holes with POR15, to protect them from any rust formation.

The tank looked great after paint, but no one had taken it apart yet. As soon as it was deleivered I could smell bad gas and hear rust sliding around. After removing the cover, this is what I found: 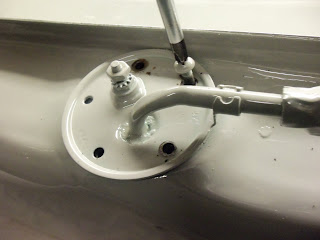 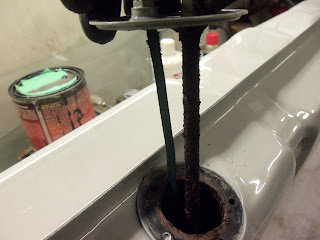 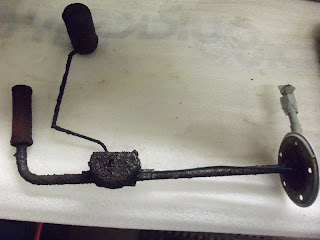 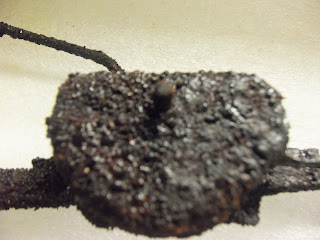 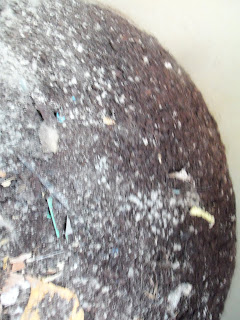 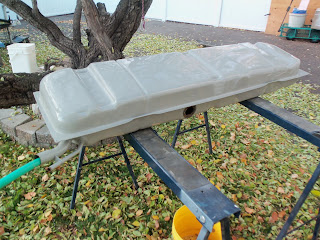 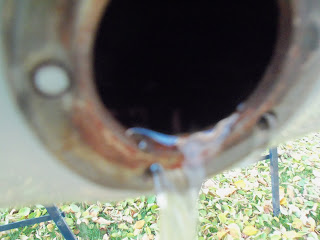 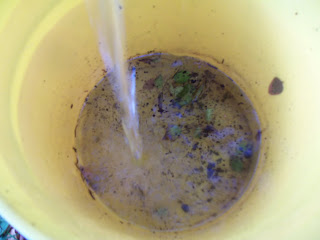 Once the tank is dry, I'll repeat the wash-out with fresh gas, then Muriatic Acid, then a baking soda solution to neutralize the acid. Once that's all dry the sealer gets poured in and the tank rotated until it's evenly distributed. Stay tuned for that tomorrow.
A couple other projects included relacing the gasket on the oil breather/filler cap. One of the owners noticed it was loose and commented on how it would dirty the valve cover quickly if oil could blow by the gasket - good eye.
By bending the tabs, the piece that clocks into the valve cover comes right out. Then I just cut a piece of rubber gasket material to match the old one and tested it for fitment - nice and tight! 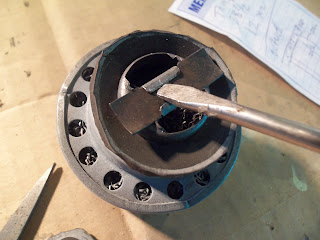 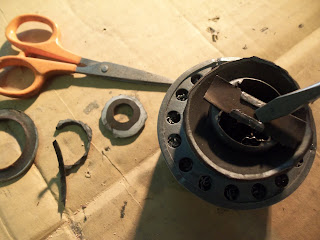 Lastly, I glued the seal onto the tranny cover lid. I used Pro-Foam seam sealer in black, which adheres well to metal and rubber. 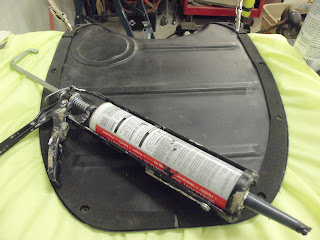 Once the gas tank is sealed, the interior will come togther quickly. I'll be able to install the tank and hook it up, do (a lot!) more work on the electrical connections under the dash, then I can install the seat and finally, the doors. It's key to do things in the right sequence: even though I would have liked to hang the doors, they would have been in the way doing all this work. Once the gas lines are attached wired and grounded, we can pressurize the engine with oil, add some antifreeze, stitch up the dizzy and get 'er running!
Thanks for following along!
Posted by E-tek at Wednesday, October 26, 2011