We all have days where it seems - no matter how hard one tries - it seems very little gets done. That was yesterday. Then there's days like today....

The 390FE for our Galaxie Convertible is getting torn down. Most of the accessories came off with little effort, but not the exhaust manifolds. For these bolts I had to resort to what is often called the "heat wrench" - which is using the oxy-acetylene to apply heat in order to release a rusted bolt. Most came out after a lot of heat and a lot of work....but 2 ended up breaking in the head - of course.

The carb from the 390 was removed earlier and after a couple days soaking in the parts washer, I gave the 4 bl Holley a good scrub in preparation for  it's tear-down and rebuild. 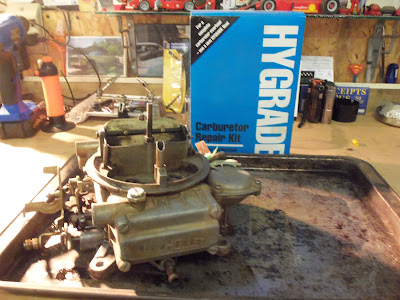 While I was in the cleaning mood, I gave the pistons from the 2 flathead engines a good scrub too 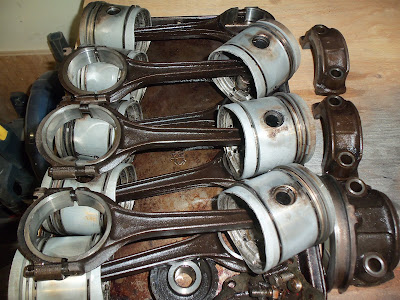 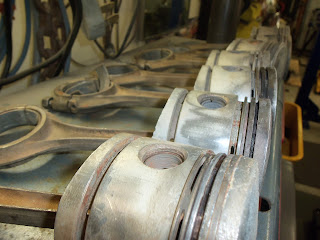 With 3 different engines being torn down it can get a little confusing at times....here the parts washer has a basket full of flathead valve springs and keepers and the distributor for the 390. At least it's all FORD!

Oops - spoke too soon! )
The Datsun seemed to be calling my name as well today and I've been happy to get a little done each weekend, so I spent some time fitting the inner wheel well section.
Much of the original portion is in good shape, so I needed to measure just the bit I needed and trim the rest away, then weld the new to the old. 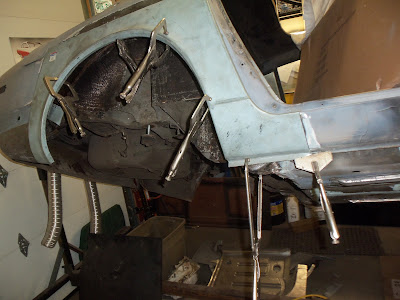 This electrical shear is by far the best metal cutting tool I've ever owned. It makes all the times I used the cut-off wheel seem archaic! It trims straight, fast and clean, with no waste and can even make tight radius cuts.

I always trim a little at a time so as to not over-cut a panel. Sometimes it's called "Sneaking up on it", rather than hacking off too much at once and leaving it too short.

Here's a view from the underside: 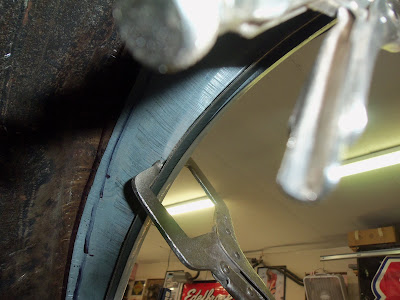 Outer panel went on and off about 20 times before all was said and done! 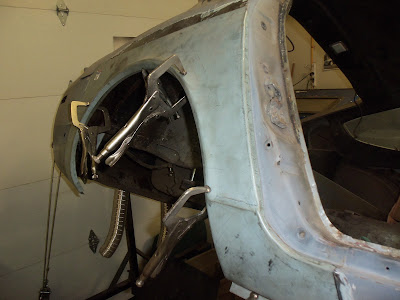 In the end, I'll end up only using the portion I'm holding - and only the part under my thumb. Sometimes it seems like a waste, but splicing in a small part and leaving most of the original section intact is the best method. 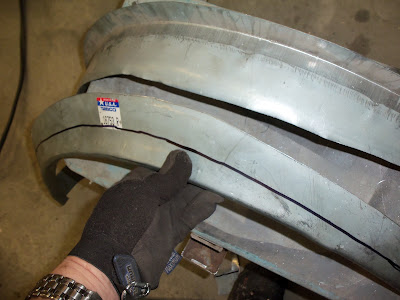 With everything measured and fit one last time, I cleaned everything up again with the grinder, then sprayed both sides with Weld-Through Primer. This will minimize any rust formation in between and around welds. 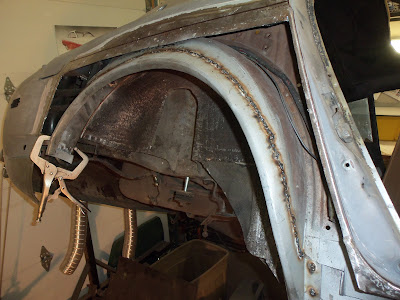 At the bottom I left a flange and then drilled holes for plug welds. This will add considerable strength to the piece. 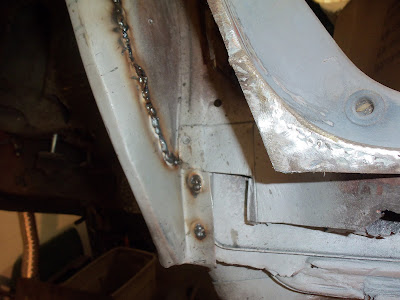 Here it is, welded solid. Next week I'll grind down the welds, check for any missed spots, then I'll final fit the outer panel and get it welded on as well. At this rate I may have all the welding work done for January! 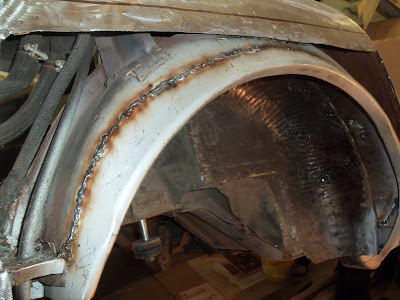 Also today (really!) I decided to get a start polishing one of the sets of aluminum flathead heads that I bought with the 2 engines last spring. 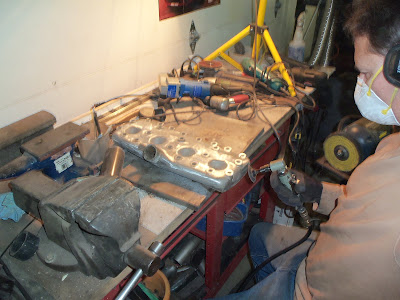 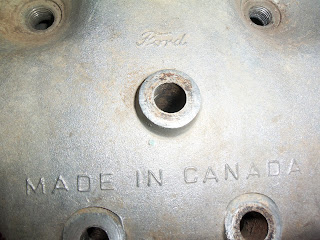 These heads where truck-issue only and have "Made in Canada" stampings on them. You won't see them on many flathead builds and with a LOT of work, they polish to a high shine. 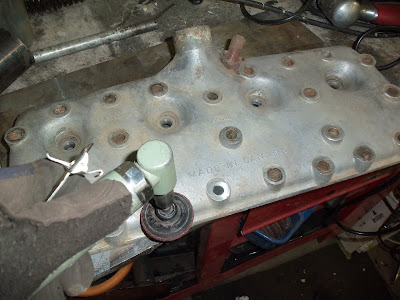 I used a "Scotch Brite" pad on the angle grinder, which mostly took off dirt, grime and rust, but also ground a bit of the surface, beginning the smoothing process and showing where the spots are that will require more work.

After about 20 minutes, this was the result: 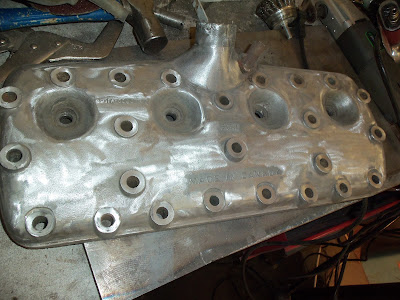 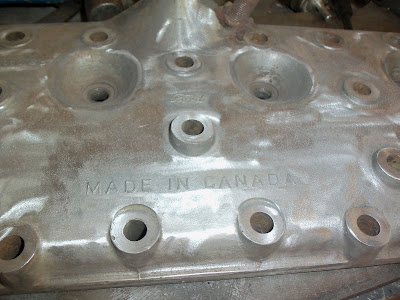 Backside cleaned up pretty well too, though it would appear they will need to be surfaced at the machine shop. 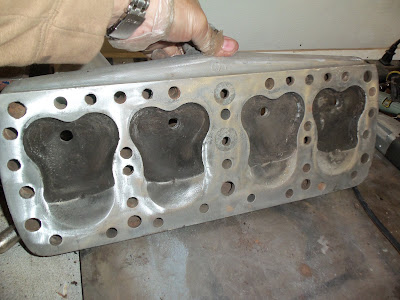 Lastly, I decided to again energize the 40 Ford's electrical system and finished up a couple circuits I had started yesterday. I hooked up the battery charger and confirmed that most everything I've tested is working, except for the door locks - which have a remote system - so it could be one of a number of things.... 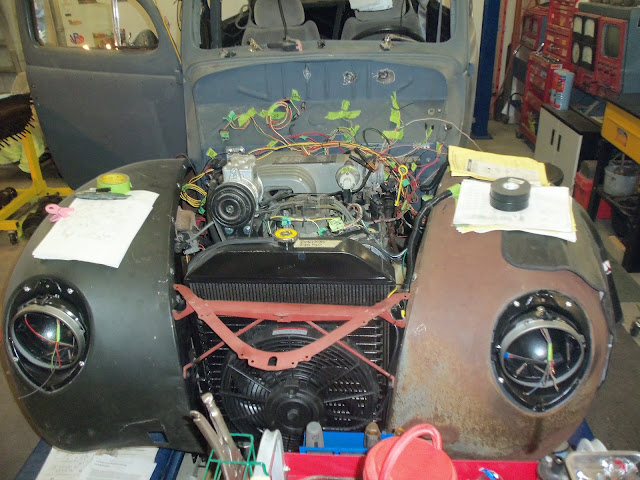 On my way out, I could feel a little more (minus 20!) air coming through the doors than usual, so I loosened the tracks, pushed the door tighter against the side wall and tightened them back up - made quite a difference! 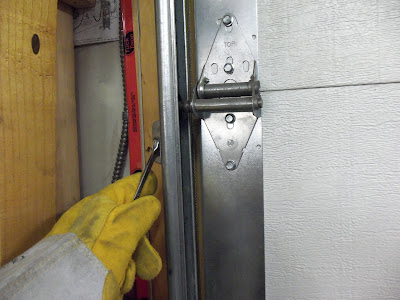