1940 Ford Project - PROTECTION FROM THE ELEMENTS 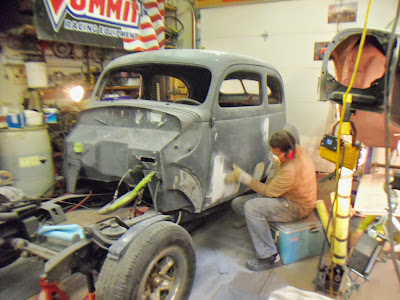 Just before the 40 Ford goes to paint, the frame, floor pans as well as the undersides of the fenders, needed an application of  rust preventative paint. Over 30+ years in the business I have seen a LOT of rust preventative products come and go, but after much trial and research, we have whittled them down to a couple  main products that have stood the test of time, research and patent application.

For this project, we opted to use RUST BULLET, on the front fenders - a brand of rust preventative that claims to be a unique single component high solids coating.. After much research and doing my 'due diligence', I feel it has the backing and history to be a useful addition to my rust-prevention arsenal and worthy of a trail and review on my blog and website. If it meets my standards I feel pretty good that it will meet my readers standards and would  recommend it for use on your projects as well. 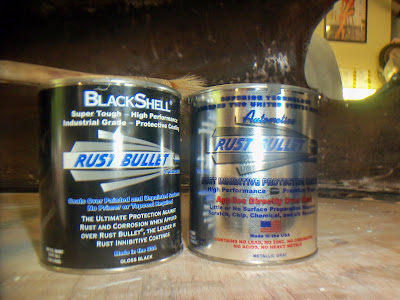 Rust Bullet is a single part urethane rust preventative paint that claims to bond to a wide variety of substrates. This is important as the frame had been painted with an epoxy, one fender was freshly sandblasted and one has a fairly consistent coating of surface rust.


We opted for brush-on application which is one of the key features that make these paints so good for the DIY - or professional - restorer alike. Not having to use our spray gun equipment, including a booth, booth space, compressed air, masking paper and tape and even solvents are some of the major factors in favour of brush or roll on coatings. As well, using a brush means you can get at all the surfaces, as well as any nooks and crannies, much more efficiently than does the spray gun. Finally, clean up is so much easier and faster with brush application: we normally use a $2 brush and just dispose of it once done. 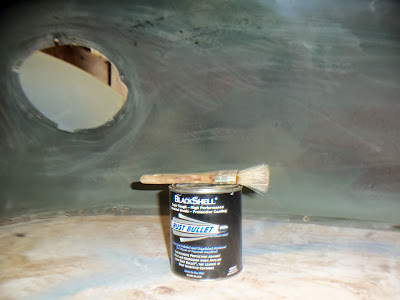 As with any single-component epoxy paints, it is of vital importance to limit the time the can is open to the environment. This minimizes air transfer and thus "skimming" (hardening of the top layer) and also minimizes any contamination that  can occur from airborne particles, including dust and moisture.

To meet these parameters I always use a transfer cup (spray bomb lids work great) to move paint from the original can to whatever I'm using to dip the brush in. This way the original can doesn't stay open to the air for long and the brush never contaminates the product. As per the instructions, we made sure to thoroughly mix the product before transferring it (see www. RustBullet.com  for complete application instructions). 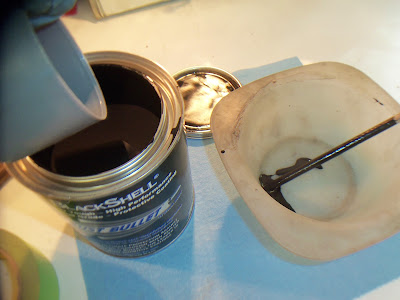 This project will be a good test for adhesion of the Rust Bullet product as one fender underwent complete sandblasting, while the other fender received a wire wheel cleaning. This means that the product will be tested on a perfectly clean surface (sandblasted), as well as over a surface-rust substrate, which is one of the major claim Rust Bullet makes: ease of use right over rust. 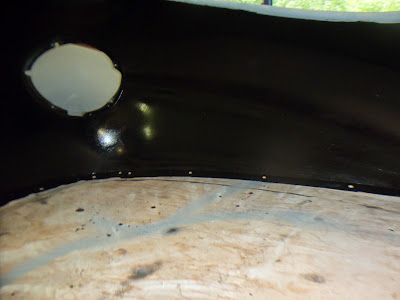 Above -  the sandblasted fender.
Below -  the surface-rusted fender 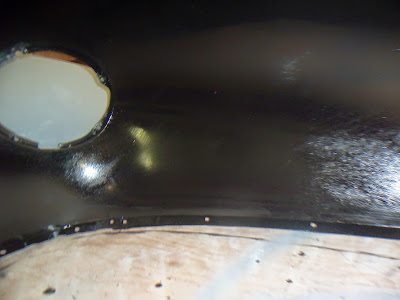 The product went on easily with a smooth, texture, tacking up in about 20 minutes.. This means there were few  brush strokes visible upon drying, which is key if the product is going to be left as the top coat on "sometime-visible" surfaces (meaning surfaces you would have to bend down, or use a hoist to see: undersides of fenders, frame, floorboards, inside trunk panels, etc).

One important difference with the Rust Bullet product is the requirement of 2 or MORE coats. This is apparently due to the fact that, as Rust Bullet dries, it releases CO2 and may leave tiny pinholes, so a subsequent application is always necessary to fill and further build up the product to a minimum thickness of 6mils for maximum protection. While certainly an important and key difference between Rust Bullet and other 1 part products, the advantage of UV protection, as well as the ability of being able to topcoat adjacent new metal without abrasion, are important positives in the home and professional shop settings.

From the Rust Bullet Website:
Rust Bullet releases carbon dioxide gas during the curing process. This “gassing off” process may create small pin holes in the first coat of Rust Bullet. The second or third coat seals these tiny pin holes, forming an air tight seal that protects the surface. If the pin holes are not sealed, air and moisture may penetrate Rust Bullet, allowing rust and corrosion to form. Rust Bullet is a simple to apply, low maintenance, super tough, high performance rust inhibiting coating. The first coat of Rust Bullet penetrates and dehydrates the rust down to the original metal surface. The second coat of Rust Bullet is necessary and critical to fill any pin holes in the first coat and ultimately forms an armor like shield on the surface. A two to three coat application generally achieves a dft (dry film thickness) of the required 6 mils for normal applications. Additional coats may be necessary to achieve the appropriate dft for your project.

Another key difference between Rust Bullet and another well-known rust preventative product is UV sensitivity. Rust Bullet can be used as a topcoat on surfaces exposed to sunlight without worrying about fading or discoloration, a factor that has long been a draw-back of other 1-part rust preventative paints.

With the fenders coated with Rust Bullet, the 40 Ford is finally ready for it's date with the paint shop. All that is left to do for them (hehe) is a finally application of high-build primer and then block sanding it again to 400Grit. A couple spots may need a second coat, just to be sure of perfection, but then it's on to sealer and topcoats!

When the rod is back in the E-tek shop in September we'll do a final inspection of the Rust Bullet product to be sure its well-adhered and is presentable. If all looks good, it'll be time for re-assembly of this iconic 20th century car with all the amenities of the 21st century!

For further reading on the Rust Bullet product, see:   www.RustBullet.com