The next E-tek project is this sweet '67 Cougar XR7, owned by Trent Lalonde, who spear-headed the resto of the '56 Chevrolet 3100 Truck I completed last month. This one will look cool done to those standards - but even though he wants it show-ready and real purdy, he told me he wants to drive it regularly and has even thought it all out - right down to shoulder belts for the back seat to keep his two beautiful daughters safe during summer cruises! How can you not like a guy like that? 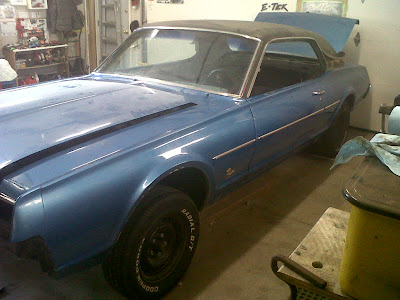 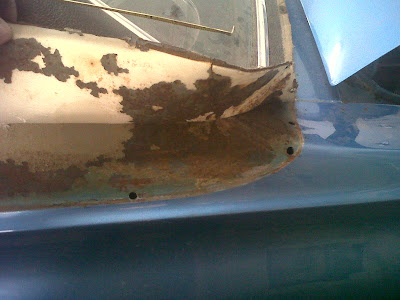 At first glance, the car looks solid and fairly clean, save for the wear of many years and 3 paint jobs.    Looking a little more closely, we start to get clues as to where some more time will need to be spent and also where some more investigation will be required. Under the vinyl top on the left side is some fairly heavy surface rust. This makes me thing there will be some perforation in the corner where the glass sits - very common.   So, very first thing I did is call my glass guy, Chase from Showtime Glass. He'll come out tomorrow and remove the delicate original glass mouldings - front and rear - as well as the glass itself. If there's one thing I've found over the years, sis that ome things are best left to the sub-specialists! 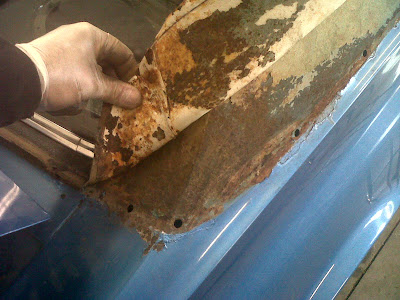 This side looks a bit worse in that the rust is spread out more, but it's not as flakey, so hopefully there isn't perforation. Regardless, it'll get sandblasted clean and if it can't withstand that, it'll get new metal. 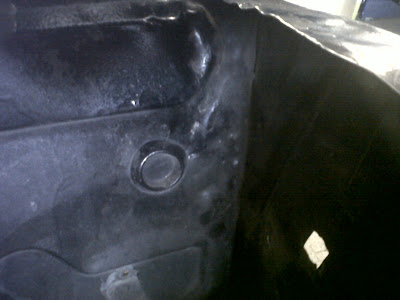 Looking closely up front, we can see it had been hit at some point, hard enough to damage the front of the inner fender. This means that this panel, and therefore this side and corner, are "shorter" than the other, non-damaged side. Critical here will be to get some measurements of the front end in an X-pattern to see if the front-end is square. It should be close, as the gaps all look decent, but there's lots of ways to hide stuff like this and even-out gaps, even though the substructure may not be square. Along with another clue - that of the hood hinges being welded to the inner fender apron, means a lot of study and likely some work will be required to get everything lined up - BEFORE bolting or welding anything to the front end. 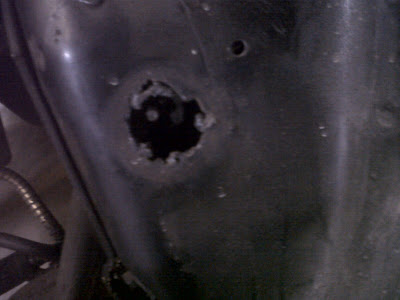 Here's a 'sweet' (I mean disgusting!) old-school access port. Trent tells me it was common on these Cougars for mechanics to cut a hole in the shock tower to access the upper ball-joints grease nipples. I guess we can say that at least someone greased the nips - but hell, they could have at least used a holesaw and then fitted a rubber button in it afterwards. Of course Ford could have thought of that too...which always leads me to think: am I REALLY the first person to think of that?? Unlikely. 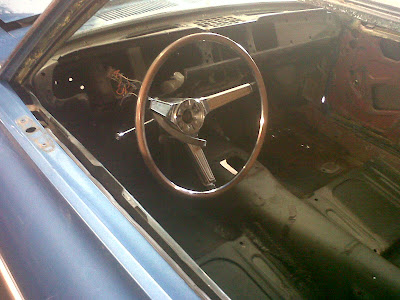 The owner tore most of it down inside and out, leaving me just the front suspension and some minor trim pieces to remove before tearing into it. With everything out, we can see some of the work that lies ahead. 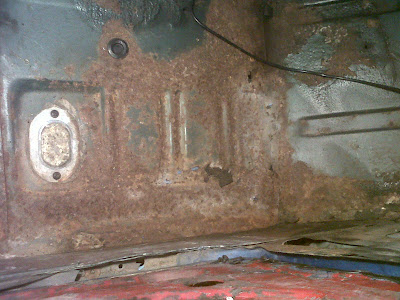 Looking inside, the floor pan is generally good, except for the passenger front section, where it's rusted through - swiss cheese style. So the decision has to be made - make a patch for this area, or order an pan just to use this area? Lucky for all, nowaday these sheet metal parts are made in good quanity AND of good quality, so that we can buy larger sections and not break the bank. That way you get exactly the cut you want, with all the right markings and ridges.
On the driver side, the floor pan is solid, but the firewall is toast. This is one of those situations where you now have to buy two large sections of metal to get the sections you need. The trick - or art if you will -  is finding some lines that would best hide the cuts and welded seams......

But for now we'll leave the Cougar until the glass is out. I can remove some trim and stuff too, but I want to get the Galaxie done so I can swap it off the lift.

Last week was like Christmas at E-tek. My big order from SUMMIT RACING was delivered by FedEx. Included was a huge box of exhuast parts and another box with shocks, bushings and other key bits and pieces that will help turn the tired old Gal into a fresh hottie that goes as well as she looks. 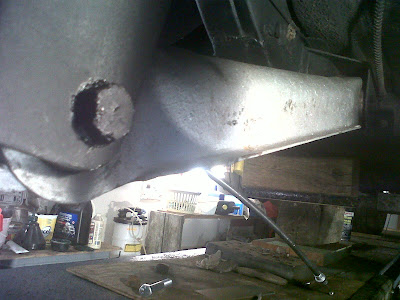 So today I continued the exhaust mock-up and fitment and then got started on installing some of the suspension parts. First up was replacing the lower control arms that where removed to repair the frame and torque boxes.
When I removed the control arms, I had to cut the bolts out of the axle shackles. I looked high and low for new replacements but couldn't find any with the exact right shank diameter. Once again I went to my parts stash and found a pair of bolts the exact same size. Where they came from I can't recall, but once again it re-enforces the need to keep most everything like that! 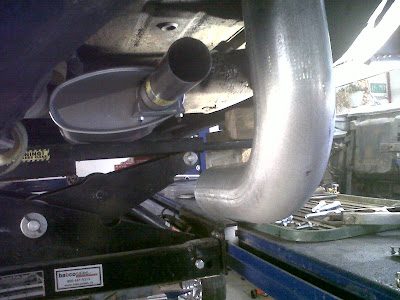 The Rolling Jack on my BendPak lift came in handy in an unexpected way too. I slid it under the mufflers to  keep them at the right height while I set up the axle section of pipe. 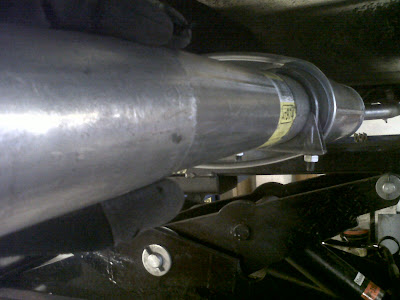 Getting close here - a little more adjustment at the other end and it should come together nicely. 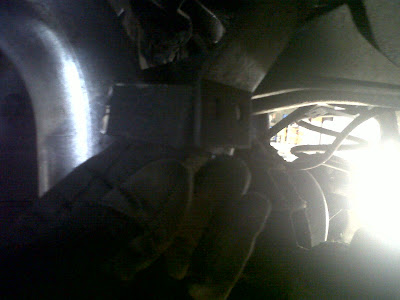 Here's the tab and hanger I made up for the up and over section. Once everything is as high and tight as possible, I tacked the tab sides to the pipe. 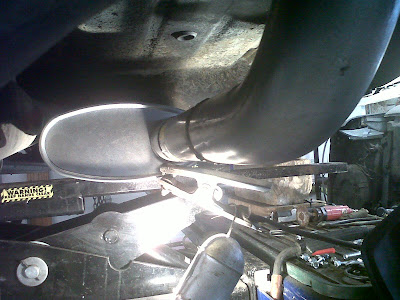 Here's the two sections welded together. The key is tucking them up nice and close - but not so close so as to cause excess heat on any key parts, as well as the cooking of any feet in the passenger foot wells.

Below is the finished product - from the trans cross-member back anyways. Now I just need to make up the front sections to tie into the stock manny's, which will include stepping the 2.5" pipe to a short section of 2", then to 1.75" to bolt into the stock openings. This will hopefully be temporary, until I get my other 390-4V rebuilt with the Flowtech headers I also bought from SUMMIT, at which time they should fit right up to these 2.5" pipes. More work, but sometimes necessary when customizing parts. 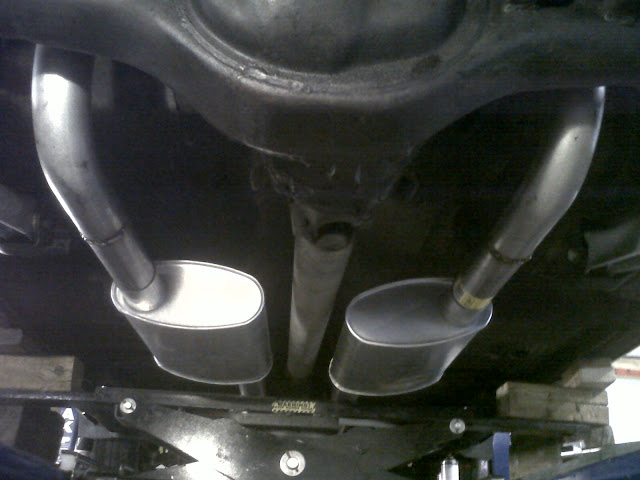 I know they look a little crooked here - the mufflers aren't welded to the pipes yet, so I've got time to make sure they are straight and even, plus tucked up close to the driveshaft. Best to leave these until the very end - just in case you need to twist the front section to fit!
Posted by E-tek at Friday, March 02, 2012 Links to this post